I’ve been reading through Alex and Brett Harris’ book “Do Hard Things” and I can’t overstate how much I like it and strongly recommend it. As a parent of a teenager, I am constantly doing battle with our culture’s low expectations for them so it is encouraging to see two young men who are giving a great message that we all need to hear. 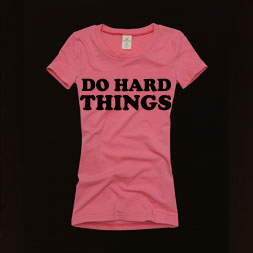 One of the things Alex and Brett talk about is that the whole idea of a special class of people called “teenagers” is a 20th century idea that has strongly taken root. In their research for the book, they discovered that even the word “teenager” did not exist publicly until 1941 and that, in an effort to protect children from cruel labor laws at the turn of the 20th century and instill universal education, we created a period where children are not yet adult but no longer children. We created the low expectations. In “America in So Many Words,” it is described this way:

Thus the years ending in -teen became something new and distinctive … The teenager remade our world. The concept is … subversive: why should any teenager enjoying freedom submit to the authority of adults? With the discovery of this new age, ours has been the century of the teenager ever since.

What does the Bible say about teenagers? Absolutely nothing. But it is not silent about youth and expectations. Instead, in I Corinthians 13:11 it says: “When I was a child, I spoke as a child, I thought as a child, I reasoned like a child. When I became a man, I gave up childish ways.” Furthermore, in I Timothy 4:12 it says: “Don’t let anyone look down on you because you are young, but set an example for believers in speech, in life, in love, in faith and in purity.” And finally, in Romans 12:2: “Do not conform any longer to the pattern of this world!”

What does our culture say? There is a joke that if Hollister (or American Eagle) said breathing was uncool, 92 percent of all teens would be dead. So, maybe it’s time for all of us to start thinking more highly and expecting more from these people we call teenagers. I leave you with the wisdom from I Corinthians 14:20:

Brothers, stop thinking like children. In regard to evil be infants, but in your thinking be adults.