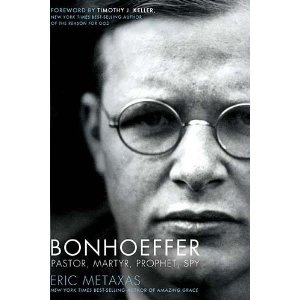 On April 9, 1945, just three weeks before World War II ended, German pastor Dietrich Bonhoeffer was hanged at the Flossenberg prison camp for his part in a conspiracy to assassinate Adolph Hitler. Bonhoeffer is remembered well for his strong faith and has been remembered beyond his death for his writings, including The Cost of Discipleship. Bonhoeffer’s legacy is a great one, and it is good to remember what he taught, even 65 years later.

In 2003, filmmaker Martin Doblmeier produced a documentary, Bonhoeffer, that looked at the German pastor’s life. In an interview on PBS’ Speaking of Faith, Doblmeier discussed Bonhoeffer with host Krista Tippett. The program is a great introduction to the man and what kind of turmoil produced some of thing he wrote.

This year a new biography is coming out on Bonhoeffer.  Written by Eric Metaxas, who also has written a biography on Wilber Wilberforce called Amazing Grace, the new book is called Bonhoeffer: Pastor, Martyr, Prophet, Spy. I look forward to reading it.