President Obama and his allies, in used car salesman mode, are pushing a massive health care overhaul bill in front of Congress, pestering them to sign it! sign it! sign it! And don’t mind the small type or the cost. Well, you should worry about the small print, because there are things you should not want to be a part of.

For instance, during a committee meeting on July 9, Democratic Sen. Barbara Mikulski of Maryland slipped in an amendment that would provide public funding for abortion. At CNSNews.com, they recount the interaction between Mikulski, Republican Sen. Orrin Hatch of Utah and Democratic Sen. Bob Casey of Pennsylvania as they query Mikulski as to just what her amendment is providing. She is evasive, but it is clear that she is pushing an amendment that will provide for federally funded abortion in a health bill. So much for freedom of choice.

Meanwhile, a Guttmacher Institute review of literature found that in 20 of 24 studies, the number of abortions went down where public-funding restrictions were in place. The results were inconclusive in the other four studies. If  President Obama, who as Candidate Obama stated that he wanted to reduce the need for abortion, is serious about seeing that happen, then he would not be in such a hurry to pass a health care bill that pushes abortion on all taxpayers. But, based on his record in his short time in office, he doesn’t appear to take the words he spoke on the campaign trail or to Pope Benedict seriously. And that is a tragedy. 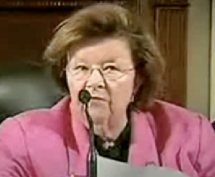 Click on image to see video of Sen. Mikulski as she
answers questions from Sens. Hatch and Casey about her amendment.