One of my favorite all-time movies is Chariots of Fire. I love it when Eric Liddell tells his sister that when he runs he feels God smiling on him. It sounds so self-centered, but the point is that Liddell is running for God’s glory, not his own. And that is a good way to look at sports or any other interest that we may pursue. It is because God has blessed us with a talent we should do it our best for His sake, not ours.

All of that brings me to the recent Olympic games in Beijing, China, where many athletes did many outstanding things. I am sure that there were many who understood that the talents that got them to China were bestowed by a great God on humble human beings. One of those great athletes is Allyson Felix of the United States. Felix, who is a sprinter, won a gold in the 1,600 relay and a silver in the 200. She was disappointed in her performance in the 200, where she was the reigning world champion, but she didn’t let that stop her from giving her all in the relay.

In a feature segment run during the games, she is clear about where her heart is. Clink on the image below for the video: 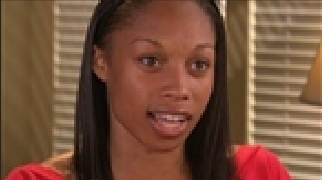 And, to remember  a truly great Olympic athlete and a dedicated servant of God: